Is it some bizarre protest against FIBs? Because they have great pizza in Chicago – let’s embrace it, not fight it 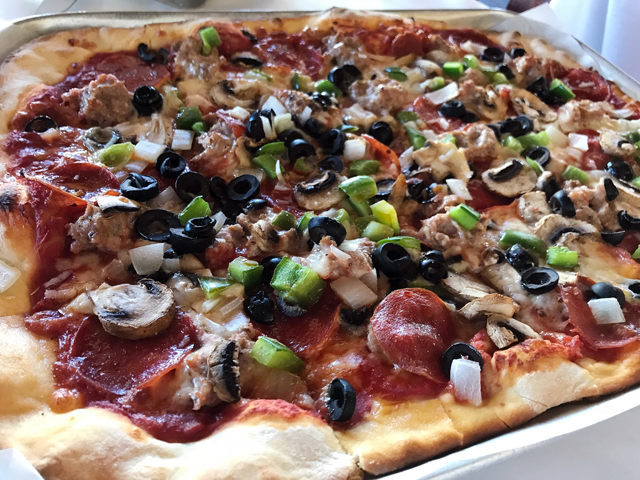 You guys know this is BS, right? Square pizza and/or pizza cut into squares? Well, I finally found out who’s responsible.

When you think of Milwaukee pizza – that flaky almost cracker-thin crust, on a rectangular pan, cut into squares – you’re thinking of Caradaro pizza, the legacy of which is served to Milwaukee pizza fans at a number of places around the city today.

I guess I should back up. I just re-read the previous paragraphs – a draft I wrote a few weeks ago – and realized it might not make sense to those of you outside Wisconsin.

Who goes through the trouble of pulling the dough into a circle – which is not easy, I can tell you – I have never achieved Perfect Roundness and I have tried – and then doesn’t even cut the slices properly?

That is, with an even, fair ratio of crust to non-crust AS PLEASETH THE LORD?

I have argued about this issue with the engineers (that is, every other single person except me, the three admins, and the art director) at work.

I maintain that triangular slices are the most fair way to distribute pizza.

They say, But what about the people who don’t like crust?

To which I say, WHY SHOULD I HAVE TO HAVE ALL CRUST JUST BECAUSE THE NON-CRUST PIECES HAVE BEEN TAKEN?

You would think engineers would be more logical but you would be wrong.

(They have figured out that for a potluck, you pull the table from the wall and run a line down both sides to double throughput, but they still put the silverware and napkins at the beginning of the buffet line, not at the end. I have given up.)

Also – the crust here is a horrible cracker crust. If I wanted crackers, I would sit it on a Ritz. Otherwise, I want a chewy, thick pizza crust.

They are not doing it right.